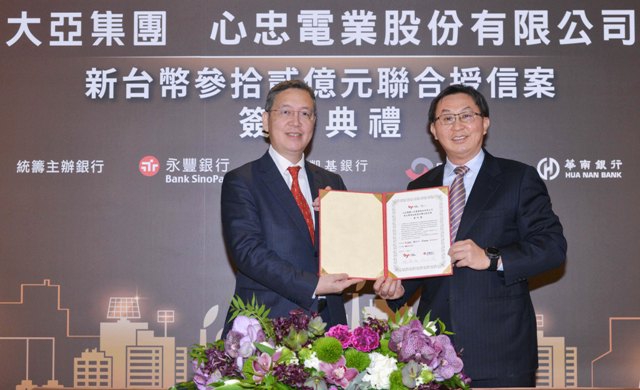 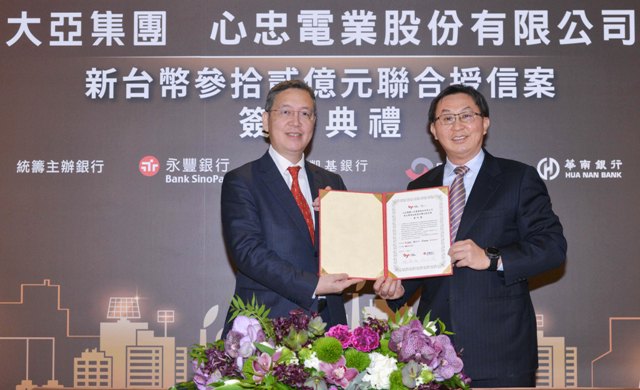 The Ta Ya Group has constantly assisted in the development of the energy industry with no fear of economic hardship! The green energy industry can be deemed as the next TSMC in Taiwan and is expected to bring hundreds of billions of dollars in solar energy production value and thus the government believes that it can generate substantial economic benefits. Therefore, the Ta Ya Group has been optimistic about the trend of the green energy and actively established the solar power plant in Tainan, Syuejia. In addition, we successfully collaborated with the Bank Sinopac, KGI Bank, Hua Nan Bank, International Bills Finance Corp.and Chang Hwa Bank to provide a loan of NT$ 3.2 Billion for Sin Jhong Solar Power, a subsidiary under the Ta Ya Group. By getting a head start on the green energy and electricity industries, Ta Ya hopes to further support the renewable energy development policies.

Ta Ya has been well-prepared for the promising renewable industry and green economy at its peak
As the situation of global warming has been getting worse in recent years, each country has set energy savings and carbon reduction as the center of its sustainable development efforts. The Taiwan government also actively promotes the energy transformation. However, in consideration of a variety of the renewable energy and the overall establishment cost, Taiwan currently puts more focus on the solar power area. Also, a target of 20 GW capacity for all solar power systems by 2025 was set to not only encourage the green electricity production, but also increase the domestic demand to drive development of the solar power industry chain. While the Ta Ya Group has targeted the trend and opportunity, developed in the green energy area for years and continued to look for feasible solar power projects in the country in the hope of building a solar power network with 150 MW capacity in three years.
For now, the Ta Ya Group owns 29 solar power plants with 31 MW capacity in total bringing incomes from solar power sales. As of February of 2020, up to 90 million kWhs of electricity have been generated. Sin Jhong Solar Power, a subsidiary invested by Ta Ya Group, will continue to develop the business in the green energy area and actively improve the Syuejia solar power plant located in Tainan receiving the most sunlight in the country in the hope of generating adequate clean energy for Taiwan.

First government-approved ground-mounted solar power plant on usage-changed land and active participation of the financial sector to achieve a profit of $2.4 billion
The solar power plant in Tainan Syuejia is the first ground–mounted solar power plant built on private land that has been turned into special purpose land upon approval by the government. Moreover, once the plant begins its operations, at least 1.8 billion kWh of electricity can be generated in the next 20 years, with an expected profit of NT$ 2.4 billion and the highest production capacity in the industry.
In order to successfully build the solar power plant, the Ta Ya Group has worked with Bank Sinopac which has made substantial efforts in the green financial service to prepare the $3.2 billion joint loan program for the Sin Jhong Solar Power under the Ta Ya Group. All the funds will be used for the establishment of the construction project. The meaningful joint loan program not only is the first program organized by the Bank Sinopac this year(2020), but also stands for the advancement allowing the Bank Sinopac to further achieve the corporate vision of “Finance Makes Life Better.” Other financial partners, including KGI Bank, Hua Nan Bank, International Bills Finance Corp. and Chang Hwa Bank, have also actively participated in the joint loan program, resulting in the loan being 1.53 times over-subscribed. It reflects the banks’ recognition of the operations of thr Ta Ya Group and the value and support for the green energy industry development. The Ta Ya Group expects to increase a 2.2 GW(Gigawatt) capacity in a year as the policy goal, promote the energy transformation and create a sustainable homeland with the cooperation of the whole industry.

Ta Ya promises to act as a basis for green energy and create a sustainable homeland
Ta Ya has planned to not only reduce the negative impact of the traditional generation on the Earth by establishing the solar power plant, but also on becoming the leading brand linking up the energy production, transmission, storage and transformation through the high-quality products and effective construction design. It is expected that all power plants under the Ta Ya Group will generate a total of 0.84 billion kWhs of electricity in 2020 which is equivalent to the carbon absorption capacity of 216 Da'an forest parks. Ta Ya aims at saving energy and reducing carbon emission to build a healthy environment and bring people a better life. The Ta Ya Group will move forward together with Taiwan society to be dedicated to the homeland with all efforts to bring hope and act as a guiding light for people feeling discouraged, worried and fearing the current economic hardships.